Beating Traffic: Time to Get Unstuck

This book is dedicated to all the people in the world who value their time as a gift to be cherished and who view every minute wasted in a traffic jam as a minute removed from their lives, and to all those who value the health of the planet earth as a responsibility which all individuals must share.

Traffic congestion is not new, but it has gone from being an exceptional event for a few  to an everyday affair for many. 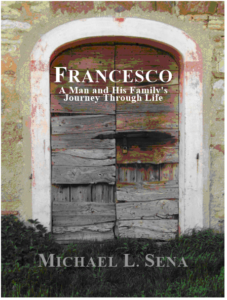 Francesco: A Man and His Family’s Journey Through Life

Francesco Vincento Arcangelo Rosati was a simple man who had a complex life, like most of us.  When he was a young boy growing up on a farm in the hills of central Italia, he had no idea that he would be taken on a journey from his pastoral home to the coalfields of the eastern United States.  He emigrated to America, but unlike many of his countrymen and fellow Europeans in the late nineteenth and early twentieth centuries, he did not leave home to seek riches and a new life.  I set out to uncover his secret and piece together his story from the fragments of facts that we know about Francesco Rosati, about his wife Rosa Notari and her family—since these two families are so tightly intertwined—and from some probable occurrences based on the places and times in which he and Rosa and our ancestors lived.  Then, to fill in the holes—and there are many of them—I have had to imagine how some events could have occurred.  This book is therefore a work of fact and fiction.  I do not pretend that it is anything else.  However, the imagination has not run wild.  Our ancestors have not been transformed into dukes and duchesses, saints or martyrs. As I said, our grandfather was a simple person; it was his life that was interesting.  This is his story as I imagine he would have told it.

A family name can say much or nothing about its bearer because everyone has the power to accept or reject the name which is given to him or her, to take the name of another or to create one that is totally new.  The most remarkable family names are those which appear to have no meaning, no connection to a place—real or imaginary—to a culture, to a profession or to person.  Even more remarkable is the fact that successive generations continue to use these names, to keep the spelling, the pronunciation and the symbolism long after their original meaning or importance has been lost to history.

Italian or American: How Mussolini’s Transformation of Italy from Ally to Enemy Between the First and Second World Wars Affected the Lives of Italian Immigrants in the United States

For some Italian-Americans during the period between the First and Second World Wars, the period of Italy’s time in the public limelight, the process of Americanization stood still or even went into reverse as they questioned whether they or their parents should have left their native country.  Beginning with the rise of Mussolini and the Fascists, they would all experience first-hand the transition of Italy following the end of World War I from being a country regarded by other Americans with indifference—if it was regarded at all—to a country which in the last half of the 1920s and first half of the 1930s was viewed with wonder.  It was praised by Winston Churchill, Franklin D. Roosevelt, the editors of the New York Times and many others.   However, as Mussolini drew his country closer to Hitler’s Germany, and when it finally Italy declared war against the United States, wonder turned to hostility, and the hostility toward Italy was transferred to Italians, including those who had lived most or all of their lives in America.  Italian-Americans would struggle through this period to decide if they were Italians or Americans or if they could be both.

It is two thirty-five p.m. on Monday, November 22nd 1965 in a town in Carbon County in the anthracite coal region of Northeastern Pennsylvania.  The roof in a section of one of the local coal mines has collapsed, sealing off four rooms and trapping six miners.  One of them, Nicco, is unconscious, lying face down on the mine floor in the sealed off section.  The lower half of his body is covered with rubble. He has worked together with the other five men for the past two years.

Except for one of the men, Wadz, the orphan from Poland, he has known each of the men since either he or they were born.  Except for Wadz, they have lived in the town where the mine is located all their lives. Once Wadz arrived he never left.  Nicco, Tony, Jonesy and Rossi left for military service and came back. Tony left again for prison and returned. Joey left for college, but didn’t make it past his first semester before circumstances called him back. It was like they never left town. These exits were temporary and failed escapes to move to somewhere else, anywhere. All six of them ended up becoming coal men.

What all six of them also share, besides a European heritage, is their decision to go down into the mines. One of them, Jonesy, had the intention of becoming a miner of his own free will. Rossi had been working in the mines since he was thirteen. It was all he knew. The rest of them, including Nicco, went into the mines as a last resort, to make a living in a town and in a region where there were few other opportunities to do anything else.  Each of them knew the dangers they would face each day, and accepted their fate every time they descended the shaft, two hundred feet below the surface, down to the seam where they worked. They had each hoped—and some of them prayed—that this day would never come, but now it has.